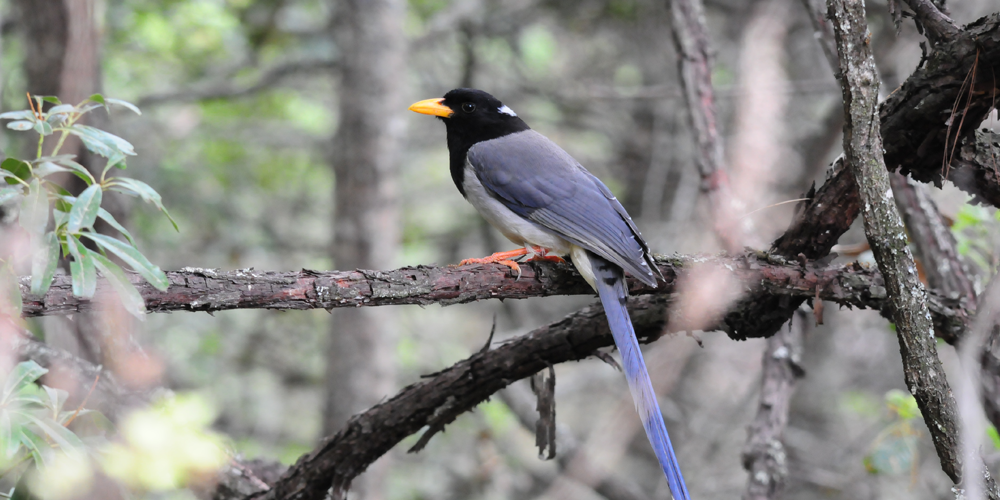 Upon arrival at Paro International airport, you will be welcomed by our company representative and the tour guide will receive and escort you to designated Hotels in Paro.

In the afternoon drive to the ruins of the 17th Century Drukgyel Dzong, an historic monument built by the Zhabdrung to commemorate his victory against invading Tibetans in 1644. In fine weather the towering peak of the sacred Mount Jomolhari (7314m) appears as a stunning backdrop. On the return drive to Paro, visit 7th Century Kyichu Lhakhang, one of the 108 temples constructed by the Tibetan king Songtsen Gampo. Overnight at Paro.

The drive to Thimphu - world's smallest capital takes about an hour on a well paved two lane road that follows Paro River downstream to the confluence with Wang Chu (Thimphu River). Along the way there will be opportunities to spot Blood Pheasant, Kalij Pheasants, White-winged Grosbeak, White-browed Rose Finch, Spotted Nutcracker, White-browed Fulyetta, Brown Parrot Bill, Stripe-throated Yuhina and various Eurasian Warblers. Before you check in at the designated hotel in Thimphu we take a short trip to downtown where we usually see Lbisbill, River Lapwing, Ruddy Shelduck, and assorted shorebirds along the riverbanks.

Depart for Punakha, the former Capital of Bhutan (77 Km) from Thimphu. Enjoy panoramic view of Black Mountain range at Dochu La. Today is an excellent opportunity to see Pheasant Species like the Satyr Tragopan and a host of mixed species that dwell in the cool broadleaf forests. En-route to Punakha, look out for the Red-flanked Bluetail and Golden Bush-Robin, Grey Bushchat abd Rufous-breasted Accentor. After lunch, enjoy a walk to Chimi Lhakhang, the temple of fertility, blessed by the Divine Mad Man in the 1500s. The walk to the temple will take about 45 minutes one way through rice paddy fields. From the temple, we walk to the banks of the Pho Chu River to look for the endangered Pallas' Fish-Eagle and the world-renowned White-bellied Heron.

Today we take an excursion along the river and up through a forest of cool broadleaf and evergreen trees to Pele-La, the pass that divides Trongsa and Bumthang Districts in Bhutan. The diverse habitats along the way should present numerous prospects of seeing a great range of species such as Cutia, Great Barbet, Woodpecker, Long-tailed Minivet, Streak-breasted Scimitar-Babbler, White-throated Laughing Thrush, Fire-tailed Myzornis, Yellow-bellied Bush-Warbler, Ashy-throated Leaf Warbler, and Verditer. Ward's Trogon is usually sighted along this road.

Today should be another day of great birding prospects but we start by looking not only for sightings of the White-collared Blackbird, the Himalayan Monal, Black-faced Laughing Thrush and White-tailed Nuthatch but also of the Himalayan Bear and Black Leopard. In the pine forests around the pass look for Rusty-flanked Treecreeper, Dark Rosefinch, Himalayan Greenfinch and Rufus-vented, Grey-crested, Green-backed Tits, Common Buzzard, Mountain Hawk-Eagle, Steppe Eagle and Himalayan Griffon. We then travel to the town of Trongsa through cool broadleaf forests where there is a good chance you will see Red-billed Leiothrix, Yellow-billed Blue-Magpie and Gray-sided Bush-Warbler.

On this short trip to Bumthang just about 67 kilometres away and along the way keep an eye out for the Yellow-rumped Honeyguide. We then climb the Yotongla Pass and enter the forests of spruce and fir abruptly changing the avifauna. The Bumthang valley, one of the most beautiful in the country, is home to Beautiful Rosefinch, Eurasian Sparrowhawk, Spotted Laughing Thrush, Ibisbill and Snow Pigeon. The Himalayan Black Bear is commonly spotted in this valley. After lunch in Bumthang, explore the valley in the afternoon visiting, among others, the textile shops, the Jakar Dzong (fortress), ancient monasteries, the local brewery, and a stupa under which, legend has it, lies the severed head of a Tibetan General who tried to invade Bhutan.

The Ura Valley is not only beautiful but has plenty of bird species to reach here, the road climbs through amazingly open countryside, occasionally running into forests. Large sheep pastures line the road and the route also crosses 3,600 m high Ura la pass and later descending into Ura by long loop across fields and pastures. Perched at an altitude of 3,100 m, Ura village has characteristically closed clustered houses which is quite unusual in Bhutan. The day is for exploring fascinating Ura valley and village.

Leaving behind the relatively dry Ura valley, the route ascends through forests of gigantic firs, often with an understorey of rhododendron. The road for a few kilometres is precipitous in the extreme, with steep drops that reveal a landscape defying description, until the pass at Thrumshingla (3,750 m) is finally reached. From this highest pass in the country, the road descends to the village of Sengor, a tiny settlement of shingle roofs and lush fields. This village is also the home to this mountain's most special bird, Monal Lophophorus Impejanus.

The next two days in the Limithang Valley promise to be the highlights of the tour. The area, situated at elevations ranging from 900m to 3,780m, boasts some of the country's most pristine forests, unrivalled in the density of tree species, and thus is a natural haven for birds. The endless stretches of forests, the quaint villages and a sleepy road which winds through the valley are all frequented by many species of birds that make the entire area a delight for bird lovers. Here we have the best chance of seeing famous Bhutanese birds that may have been missed elsewhere during the trip like the Rufus-necked Hornbill, Ward's Trogon, Satyr Tragopan and endless others. There will be opportunities to spot, amongst others, the Collared Scops-Owl, Collared Owlet, Himalayan Swiftlet, Striated, Black-crested, White-cheeked, Red-vented, Ashy, Black and Mountain Bulbuls, Golden-breasted and Yellow-throated Fulvetta, Slender-billed Rusty-cheeked, Streak-breasted, and Coral-billed Scimitar-Babblers, Hill and Rufecent Prinia, Gray-headed Canary Flycatcher, Common Tailorbird, Bronzed, Lesser Racquet-tailed and Hair-crested Dorangos, and Scarlet Finch.

Having reached the east-most part of the tour, we start to retrace our journey back to western Bhutan. It doesn't however mean that no new birds will be added to the sighting list!

Leaving behind the spiritual heartland of Bhutan, we continue driving west through Trongsa and Gangtey where we may stop to visit Dzongs and Monasteries, and on to Wangdue Phodrang at the southern end of the Punakha Valley.

In the morning you will drive to sightseeing. Depart for Paro after Lunch. Evening: Take a stroll through Paro town. The town is flooded with handicraft shops catering to tourist interest. There also fake jewelry shops. Bargaining is accepted and part of business deals.

The guests will be Seen Off by a Representative of our company and the Tour Guide at the Exit Gate. Wish Bon Voyage!!!