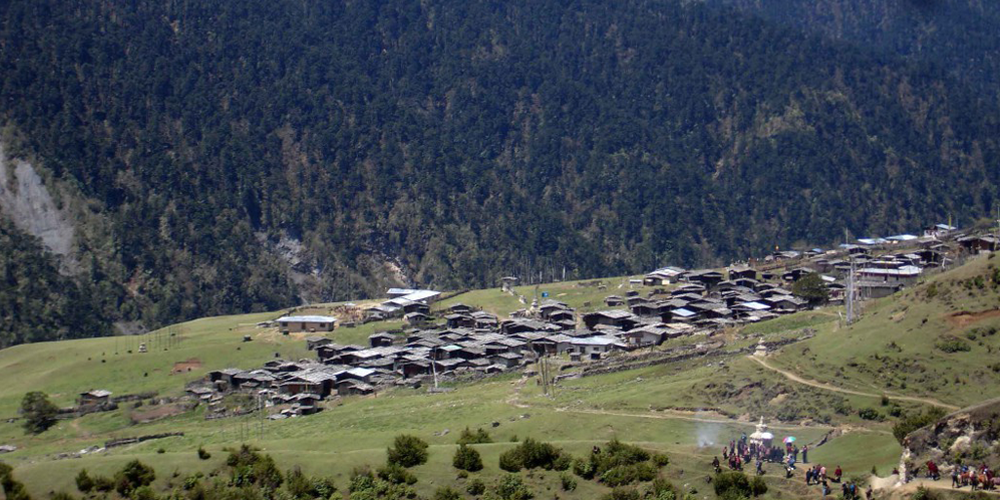 Welcome to Bhutan, the Land of the Thunder Dragon. Touching down at Paro International Airport, you will be greeted by your guide upon exiting the arrival hall. Today, we will take it easy to acclimatise to the altitude. Drive to Thimphu, check in to the hotel and lets have your first taste of Bhutanese cuisine and some light sight-seeing in Thimphu if possible.

Today we will start our sightseeing tour visiting Memorial Chorten built in memory of the 3rd King Jigme Dorji Wangchuck who reigned the Kingdom from 1952-1972. Visit the National Library where ancient manuscripts are preserved. Further, we will visit the Zorig Chusum - 13 Arts & Crafts Institute where traditional arts and crafts are still kept alive. The visitors can see students of different trades at work like: Sculpting, Thanka Painting, Wood Carving and other skills.

Afternoon visit to the Textile Museum, Handicrafts Emporium, Crafts Bazaar where Bhutanese textiles and other arts and crafts are displayed and can be purchased. In the evening free for a leisure walk to explore Thimphu. The walk around the city is easy and would be enjoyable to experience the Bhutanese way of life.

In the morning drive to Gantey. Enjoy panoramic view of Black Mountain range at Dochu La, Visit Druk Wangyel Lhakhang, and Royal Botanical Garden on the way. Dochu La is a paradise for photographers.

Passing Wangdue (left), one of the major towns and district capital of Western Bhutan. Located south of Punakha, Wangdue is the last town before central Bhutan. The district is famous for its fine bamboo work and its slate and stone carving.

We will pause to view the Wangdue Phodrang Dzong. Built in 1638, Wangdue Dzong is dramatically perched on the spur of a hill and overlooks the confluence of the Tsang Chu and Dang Chu rivers.

The valley of Phobjikha is well known as the winter home of the Black necked crane (Grus Nigricollis). Bhutan is home to around six hundred black-necked cranes with Phobjikha being one of the popular places that the birds migrate to in the winter months from the Tibetan plateau. The elegant and shy birds can be observed from early November to end of March. This is an old monastery that dates back to 17th century. Today we will do some short hikes around the valley of Phobjikha.

Trongsa, literally "New Town" in the Dzongkha language, is where the current monarchy had its origin in Bhutan. Each King in the line of succession has held the post of Trongsa Penlop or Governor before donning the Raven Crown.

Trongsa Dzong - The foundations of Trongsa Dzong were laid in the 16th century by by Pema Lingpa. The Dzong flourished during the 17th century under Shabdrung Ngawang Namgyal. With its massive structure, its wall looming high above the winding Mangde Chu Valley, the Dzong commands the east-west road.

In the morning, we will hike to the Tamshing Goemba, built in 1501 by the Buddhist saint Pema Lingpa. We will also visit Kurjey Lhakhang, one of the most sacred monasteries in Bhutan. Built by the Guru Rinpoche in 1652, it houses a rock with his body imprint. We will also visitJambay Lhakhang, built in 659 by Tibetan King Sontsen Gampo to pin down demons who was obstructing the spread of Buddhism.

Jakar Dzong - pitched on a high ground overlooking the town junction, it was built as monastery in 1549 by the great grandfather of the Zhabdrung. It is now used as the administrative center for Bumthang district. In the afternoon, we will hike up to Thangbi Valley, crossing a suspension bridge to visit the Thangbi Lhakhang built in the 14th century via an unpaved road.

On route to Trashigang from Bumthang is the biggest national park in Bhutan called the Thrumshingla National Park. The 768 sq.km of this national park is located within the boundaries of four districts: Bumthang, Lhuentse, Mongar and Zhemgang and it was established in 1998.

On this long drive, enjoy the natural beauty of the undisturbed environment and take pics of some breath taking scenery like the Namling Bra (cliff) waterfall which falls down the deepest cliff in Eastern Bhutan.

Drive from Trashigang to Radi and Khardung villages and the starting point. It is a steady climb today on a slippery foot path through forest, occasionally along the Murbi Chhu, finishing in 3-4hr at Charbaling winter grazing grounds.

A 2 hour climb to Thumburtsa La (3273m) from Charbaling from where another 3-4 hour of easy hiking leads to Merak Village via Genoa.

You can choose to stay in Merak for a day or two. There are lots to see like the villages and lakes. If not, keep going from Merak to Sakteng including crossing the Nyuksang La (4,140 m). A steady climb of 2-2.5 hour leads to the pass, from where a steep 3 hour descent with 1 hour along a river gains Sakteng. At the end of the day, a steep climb of 1 hour leads to a chorten form where it is 30 mins down to Sakteng located in a big open space surrounded by heavily forested mountains.

It's worth spending an extra day in Sakteng to explore. Sakteng had about 60 houses in the past and the village has grown a little over time. The inhabitants are very religious and north and east of Sakteng -in India - are many important Buddhist temples.

Carry on to Jyonkhar crossing a small pass, Munde la (2,928 m). There are a couple of small ups and downs before reaching Jyonkhar after 5-6 hour.

Long drive back to Bumthang. Have a nice rest in your vehicle while enjoying the scenery

We drive to Punakha a much warmer valley with its own beautiful characters and many stories of its own.

Punakha Dzong - Built in 1637, the dzong continues to be the winter home for the clergy, headed by the Chief Abbott, the Je Khenpo. It is a stunning example of Bhutanese architecture, sitting at the fork of two rivers, portraying the image of a medieval city from a distance. The dzong was destroyed by fire and glacial floods over the years but has been carefully restored and is today, a fine example of Bhutanese craftsmanship.

Chhimi Lhakhang- A 20 minutes walk across terraced fields through the village of Sopsokha from the roadside to the small temple located on a hillock in the centre of the valley below Metshina. Ngawang Chogyel built the temple in 15th century after the 'divine Madman' Drukpa Kuenlay built a small chorten there. It is a pilgrim site for barren women.

Khamsum Yulley Namgyal Chorten- Built by the third Queen Mother Ashi Tshering Yangdon wangchuck this Chorten is a splendid example of of the Bhutanese architecture and art and is the only one of its kind in the world. It has been built over eight and a half years and its details have been drawn from religious scripture.

Paro Dzong - also known as Rinpung Dzong, this 15th century massive fortress/monastery, is also the administrative center of the dzonkhag

Taktsang Monastery - A one hour hike to the cafeteria is also a vantage view whereby you can enjoy the stunning view of the monastery. Prayer flags adorn the cliff and this is also where Guru Padmasambhava landed on the back of a tigress in the 8th century.

Kyichu Lhakhang- After a sumptuous local lunch, we will retrace our steps to visit Kyichu Lhakhang, one of the oldest temples in Bhutan.

The guests will be Seen Off by a Representative of our company and the Tour Guide at the Exit Gate. Wish Bon Voyage!!!